Most enzymes are globular.

Non-polar residues seclude themselves in a hydrophobic "core" area.

Other ways of maintaining 30 structure "Salt Bridges" and "Disulfide Bridges" 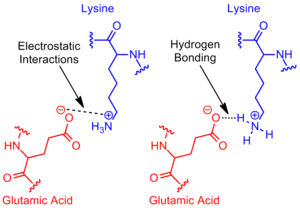 One feature that most globular proteins share is the ability to bind certain small molecules.

The site where binding occurs is the active site.

The small molecules that bind are called substrates.

The most common type of globular protein that is capable of binding a small molecule is an enzyme.

Are catalytically active proteins which convert substrate to product.

Are specific for their substrate and reaction.

Most enzymes require a supplementary chemical group, called a co-factor,to be fully active. There are organic and inorganic co-factors, many enzymes contain both.

Oraganic: there are two types, co-enzymes and prosthetic groups.

>Globular proteins, especially those in circulation, are often modified to increase solubility and enhance biological activity.

>One method is by the covalent attachment of a sugar unit, glycosylation ------> glycoprotein

>The variety of sugars, sugar modifications and different linkages give glycoproteins a very high information content.

> are anchored to a membrane

>can be categorized as:

Receptors-extracellular globular domains can bind specific molecules such as, hormones.

>In diabetic patients, blood sugar can reach very high levels ------> the aldehyde groups on these glucose molecules can spontaneously react with free amines on circulating proteins.

>Since Hb is an abundant blood protein, it is frequently glycosylated in a "non-enzymatic" fashion.

>If glucose levels remain uncontrolled for months (long-term), the attached glucose will form a non-reversible cross-link with a second amino group.

>AGE's can be measured and are a good indicator of long term blood glucose control in the diabetic patient.

The three main types of structural or fibrous protiens fround in the human body are: collagens, elastins and keratins.

~25% of the proteins found in the body are classified as collagens.

Collagen Helix: Only 3.0 residues per turn vs. 3.6 for an average a-helix.

Collagen Fibrils: The triple helices are arranged in staggered fashion (covalent crosslinks vital to the structure of mature collagen).

3) Hydroxylysines can be glycosylated on their newly acquired -OH groups. (sugar attachment)

4) Cysteine residues at the ends of the collagen helices are oxidized to form disulfide bridges, this places the chains in proper orientation for triple helix formation.

5) Covalent crosslinks are formed between allysine and lysine during fibril formation:

(a) Oxidation of certain lysine and hydroxylysine residues converts them from amines to active aldehydes (allysines). The enzyme for this reaction is lysyl oxidase, co-factors: copper, Vitamin B6.

(b) A reaction between these aldehydes and free amino groups on other lysine residues forms a "Schiff" base, then covalent crosslink.

Elastin: is another important class of insoluble fibrous proteins.

1) Some prolines are hydroxylated. (not Lysine, so no glycosylation)

2) Some Lysines are oxidized to active aldehydes (allysine).

Four lysines are crosslinked in a unique fashion called desmosine.

There are two types of keratins:

In hair and nails the a-helices of adjacent strands are crosslinked by disulfide bridges.

Nails: there are numerous disulfide bridges making them resistant to chemical alteration ----> "hard"

Hair: there are relatively few disulfide bonds and they can be easily disrupted with "reducing" agents.

Some heritable diseases related to collagen:

-crucial part of the body's defense system or "Immune Response"

All antibodies belong to the family of proteins called immunoglobulins, named for their role in the immune response, i.e. their ability to specifically recognize antigens (foreign invaders).

-Immunoglobulins share a common structure of three subunits arranged in a trimeric unit.

-Although, some immunoglobulins are more complex and contain multiples of this unit.

Features of the Antibody-

3) The chains are joined by interchain disulfide bonds.

IgG Molecule (an illustration of the basic immunoglobulin unit):

(a) several globular domains, intersecting at a central "hinge" region

(b) each globular domain is stabilized by intrachain disulfide bonds

(d) the two variable regions on each side form the binding site for an antigen, the immunoglobulin molecule has two identical binding sites

(e) "the two binding sites are identical within a single Ab molecule, no two Ab's are alike"

-susceptible to digestion by proteases, i.e. pepsin or papain

Fc ("crystallizable") fragment mediates many of the functions common to an immunoglobulin class.

(Fc portion is derived solely from the heavy chains, differences in the heavy chain constant regions are what distinguish one class of immunoglobulin from another.)

-a single antigen binding site is formed by the convergence of the variable regions from one heavy chain and one light chain (two binding sites per subunit).

-some do not vary much, forming the three-dimensional framework of the globular domain

>in the heavy-chain variable regions there are four CDR's

>in the light-chain variable regions there are three CDR's

>each CDR faces towards the antigen binding pocket and recognizes, but does not elicit antibody response, a small set of features on the antigen surface

Inject the surface component of a "dead" virus or bacteria (one that has been modified so it is non- virulent).

Ab's will be produced for this surface component.

If the vaccinated individual is later exposed to a virulent form of the virus his/her immune system will be prepared -------> making short work of the virus.

More Difficult: HIV, has the ability to alter it's cell surface proteins in endless permutations

Body no longer recognizes "self", develops Ab's toward it's own cells.